Snake Bite and Miles from Help 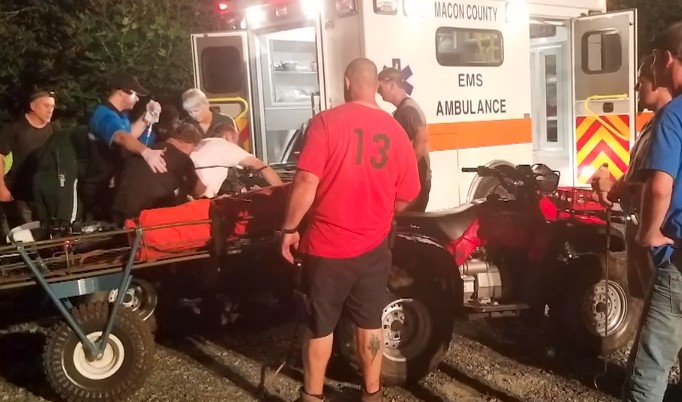 “Hi, sweetheart. I love you so much. I got bit by a snake and I can’t move hardly anything. So I don’t know if I’m going to make it out of here or not but I just love you.” In August 2018 Scott Vuncannon was hiking near his cabin in North Carolina with his dog Boone. He stopped for a moment to look around when he saw movement on the ground, then he felt a painful sting in his leg. He says, “I saw that it was a snake head and two fangs coming out and I-I immediately jumped back and I’m like, ‘Oh my gosh, I just got bit by a snake.’”

Scott had been bitten by a timber rattlesnake. He could taste the poison in his throat almost immediately. He quickly tied a tourniquet around his leg, and tried to hike his way out. He says, “I pulled my phone out to call 911, and as soon as I reached and pulled my phone out and it said no cell service, that’s sort of when my heart sank. I felt the effects of the venom starting to react to my body. And I was losing equilibrium, my vision was getting more blurred. I was throwing up, uh going in and out of consciousness. I think I had passed out maybe two or three times at that point.”

Scott collapsed on the trail nearly four miles from his truck, meanwhile, his wife Nan was overcome with a terrible feeling as she drove to meet him at their cabin. She remembers, “Every time I would stop, I would call him, and then I started texting him. And then I just had this, honestly, it was a spirit of dread. It was just kind of hovering over me, and uh my thoughts were just spinning. Uh what if something’s happened to him?”

Nan soon found the trail map at the cabin, then drove to the trail. She located his truck, but there was no sign of Scott. She then drove to a hiking store where she met the fire chief’s mother in law and shortly after a search was underway. All Nan could do now was trust God and pray. “I had nothing else to do but trust Him. Like that was what – what was I gonna do? I-I couldn’t – I couldn’t affect right then but that… I would read a Scripture, or I would just uh, you know, just petition the Lord. Like uh, some – ‘Help, help.’”

She called Christian neighbors and family, and an international prayer chain quickly spread. Meanwhile Scott lay on the trail praying for rescue. Scott says, “When I began to pray to Him -and, you know, focus on Him, I just felt His presence. I felt – I felt that He was with me, you know, during this whole ordeal. And I just kept getting reassurance that He was gonna be with me through the whole thing.” Scott fired a pistol into the air, hoping someone would hear the shot. He then made a video saying goodbye to his family. “At that point I really didn’t fear death. I did – I didn’t – I-I had given in uh – I had fought, you know, so-so much that afternoon to breathe and stay conscious and alert, but at around 5 o’clock, uh right before I made the video, I had given in to the Lord and basically said, ‘I’m ready to go, Lord, please take me.’”

About 7:30 that night the first rescuer found Scott barely clinging to life. He called for others to hurry to the scene. Davis Picklesimer from the Highlands Fire and Rescue remembers what he say, “His body was black, he was swollen he was just black all the way up his side. And going in and out of consciousness as well.”

Another rescuer, Justin Kingsland says, “And his pulse was low and his blood pressure was dropping fast we immediately started to pray for him to cause he looked like he was checking out!”

Scott says, “I remember telling them that I wasn’t going to make it, that I – that I didn’t think I would make it. And they kept encouraging me and telling me that they were gonna get me out of there.”

Justin Kingsland recalls, “I just said, ‘Hey mate, do you believe in Jesus?’ Because I knew he needed it. We knew that he had a long way ahead of him and he needed to have all the strength, when he said, ‘Yes I do.’ I knew we had a hope.”

Over two dozen rescue workers worked late into the night to transport Scott out from the steep terrain. They reached the ambulance after midnight. Chief Ryan Gearheart remembers seeing Scott as they loaded him into the ambulance. “He literally was almost lifeless. The length of time he was in there and the venom going through his entire body, you just don’t see people pull out of that.”

Once again, the team gathered to pray as the ambulance drove Scott to a life flight helicopter. Scott received 12 shots of anti-venom at the hospital and spent three days in the ICU. His liver, kidneys and intestines had shut down yet miraculously began healing. When he woke days later he knew God had saved him. “I knew God was present. I knew He was there, and I knew he was taking charge of every sit – part of that situation. And uh everything had to work just in perfect harmony, in perfect uh – in-in His perfect timing for me to alive and to be here talking to you. I-I-I shouldn’t be here.”

Miraculously, Scott made a full recovery and has no lasting effects from the snake bite. He and Nan are thankful for the prayers and the hand of God that caused all things to work together for his survival. Nan says, “Absolutely it’s a miracle. Everybody uh that listened to the prompting to-to do what they did, I think it just all came together in just this one big miracle, to-to glorify the Lord. He – Scott is a miracle, right? Like he – the Lord is still working miracles, because he is one, because I saw it.”

“Physically it was the hardest thing I’ve ever been through in my life, but spiritually it was probably the best thing I’ve ever been through,” says Scott. “The Lord showed me that, you know, I’m not always in control of every situation and-and, you know, that He’s in control. And that I needed to lean on Him and lean into Him to-to make it out of there. And that’s what I gave in to, I just gave in to being with Him and-and letting Him lead the way.”