Why Not For Man? 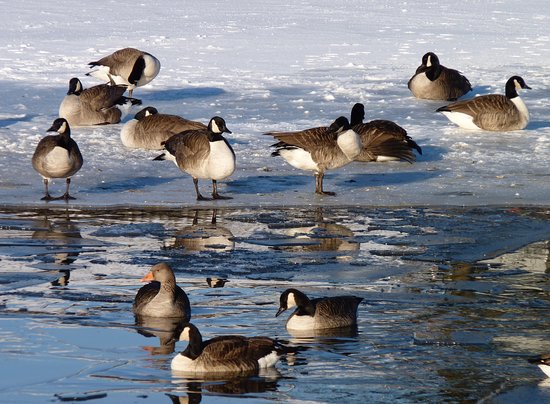 Where we live, on the Eastern shore of Maryland, the gentle waters run in and out like fingers slimming at the tips. They curl into the smaller creeks and coves like tender palms.

The Canada geese know this place, as do the white swans and the ducks who ride an inch above the waves of Chesapeake Bay as they skim their way into harbor. In the autumn, by the thousands, they come home for the winter. The swans move toward the shores in a stately glide, their tall heads proud and unafraid. They lower their long necks deep into the water, where their strong beaks dig through the river bottoms for food. And there is, between the arrogant swans and the prolific geese, an indifference, almost a disdain.

Once or twice each year, snow and sleet move into the area. When this happens, if the river is at its narrowest, or the creek shallow, there is a freeze which hardens the water to ice.

it was such a morning.

near Oxford, Maryland, that a friend of mine set the breakfast table beside the huge window, which overlooked the Tred Avon River. Across the river, beyond the dock, the snow laced the rim of the shore in white. For a moment she stood quietly, looking at what the night’s storm had painted. Suddenly she leaned forward and peered close to the frosted window.

“It really is,” she cried out loud, “there is a goose out there.”

She reached to the bookcase and pulled out a pair of binoculars. Into their sights came the figure of a large Canada goose, very still, its wings folded tight to its sides, its feet frozen to the ice.

Then from the dark skies, she saw a line of swans. They moved in their own singular formation, graceful, intrepid, and free. They crossed from the west of the broad creek high above the house, moving steadily to the east.

As my friend watched, the leader swung to the right, then the white string of birds became a white circle. It floated from the top of the sky downward. At last, as easy as feathers coming to earth, the circle landed on the ice. My friend was on her feet now, with one unbelieving hand against her mouth. As the swans surrounded the frozen goose, she feared what life he still had might be pecked out by those great swan bills.

Instead, amazingly instead, those bills began to work on the ice. The long necks were lifted and curved down, again and again. It went on for a long time. At last, the goose was rimmed by a narrow margin of ice instead of the entire creek. The swans rose again, following the leader, and hovered in that circle, awaiting the results of their labors.

The goose’s head lifted. Its body pulled. Then the goose was free and standing on the ice. He was moving his big webbed feet slowly. And the swans stood in the air watching. Then, as if he had cried, “I cannot fly,” four of the swans came down around him. Their powerful beaks scraped the goose’s wings from top to bottom, scuttled under its wings and rode up its body, chipping off and melting the ice held in the feathers. Slowly, as if testing, the goose spread its wings as far as they would go, brought them together, accordion-like, and spread again.

When at last the wings reached their fullest, the four swans took off and joined the hovering group. They resumed their eastward journey, in perfect formation, to their secret destination.

Behind them, rising with incredible speed and joy, the goose moved into the sky. He followed them, flapping double time, until he caught up, until he joined the last end of the line, like a small child at the end of a crack-the-whip of older boys.

My friend watched them until they disappeared over the tips of the farthest trees. Only then, in the dusk, which was suddenly deep, did she realize that tears were running down her cheeks and had been – for how long she didn’t know.

This is a true story. It happened. I do not try to interpret it. I just think of it in the bad moments, and from it comes only one hopeful question: “If so for birds, why not for man?