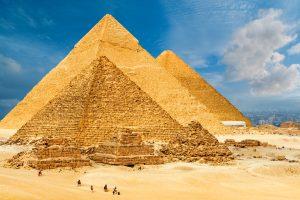 The pyramids of the Giza Plateau are possibly the most famous structures in the world. The pyramids had great social meaning when they were built. Much more than just royal tombs, they represented the dignity and power of kings. So building a pyramid was a national project involving the entire country. Every household in Egypt sent workers, grain, and food to contribute to this project, which enabled the king to become a god in the afterlife.

The final step in the building program was to place a capstone encased in gold on top of the pyramid. The capstone signified that the monumental project was finally finished, and it was a time for dancing and singing as the entire nation celebrated completion of the national project.

In this sense, it was the pyramids that built Egypt rather than the other way around. The pyramids unified the nation in the service of one great and monumental achievement.