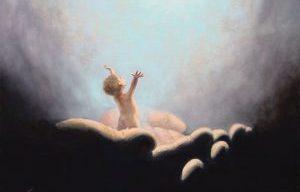 The most famous ship of all time is possibly the Titanic, the supposedly unsinkable ship that went down on its maiden voyage. Many movies have been made and many books written about the fateful journey. Few will include the story of Scottish evangelist John Harper. Harper was a passenger on the Titanic.

In 1912 Harper was travelling to Chicago to take up his appointment as Pastor of Moody Church. He had his daughter Nana on board with him. His wife had died a few years earlier. When the Titanic struck the iceberg and began to sink he put Nana into a lifeboat and then ran throughout the ship yelling “Women, children, and unsaved into the lifeboats!” When the ship finally went down he had already given his lifejacket to another passenger. Survivors report that to the very end Harper was witnessing to anyone who would listen. One survivor recalls clinging to one of the ships spars when Harper floated near him.

“Man, are you saved?” cried Harper.

“Believe on the Lord Jesus Christ and you shall be saved” pleaded Harper.

The waves carried Harper away and brought him back a little later. “Are you saved now?” asks Harper.

“No, I cannot honestly say that I am” says the man.

Again Harper pleads with him, “Believe in the Lord Jesus Christ and thou shalt be saved”.

Shortly afterward Harper went down. The man who survived was one of only six people rescued, but in a public meeting four years later, recounting this episode he said “There, alone in the night, and with two miles of water under me, I believed. I am John Harper’s last convert.”