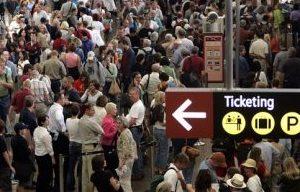 Have you ever been in a situation where you feel alone, lost, darkness all around and thought God had forgotten you existed?

We all experience times like these. I will never forget my own a few years ago while in South Africa visiting my parents.

The ten-day vacation was coming to an end and I expected to be home in the States within the three days. Unfortunately, the staff of the airline I was to travel on went on strike, resulting in no flights coming to or leaving South Africa.

Initially, I was not concerned. Surely, I thought, this will resolve itself within the next three days. But no, it did not resolve. It went on for weeks.

Panic set in because I needed to get back to the States as work and family were waiting for me. I prayed and prayed, begging God to intervene in the strike so that I could fly home. Daily I called the airlines. There was never any change.

Finally, after two long weeks of striking, a few flights left South Africa. But by this time there was such a backlog of passengers camped out at the airport that it would be weeks longer before I was able to leave.

Still, I could not wait any longer. I had to get home. I presented my problem to the Lord once more. And, in faith, took action on my request to Him.

My parents took me to the airport, which was a good two-hour drive. Not knowing what to expect when I got there, I planned to join those sleeping on the floor hoping to get a flight out.

We arrived at the airport and it brought my stomach to my throat. The sight of the throngs was too awful to bear!

“We’re just going to turn around now and return home,” my mom said.

My dad, on the other hand, is one of those old time believers in God’s amazing work in the worst of situations.

“I think she should just step out in faith and see what happens,” he said.

We parked miles away and fought the crowd to the terminal. People were sleeping, standing, camping out in the terminal. No line was moving. I had no idea where to go to even begin to put my name on a waiting list.

And then God intervened, as He always does in such circumstances. There I was standing with my huge suitcase, in the middle of the crowd, totally dazed, not knowing where to turn, when one of the airport attendees suddenly reached for me and asked, “Where are you going?”

He replied, “Come with me.” He picked up my suitcase and escorted me right to the front of the line, leaving everyone else yelling and cursing at me. He waited with me at the counter and helped me get on a flight. The flight had one seat open to New York.

After checking in, I went to find my parents, who were still in shock at what they had just witnessed. My dad, tears running down his face, smiled and hugged me, saying, “Well? Once again, all you had to do was step out in faith, making your requests known to Almighty God and He answered. But you had to act on your faith. Why do we doubt God?”

Looking back over the whole situation, my faith in God increased tremendously. What happened? Why was I chosen out of the crowd? I will never know why, but I can only say that God took this situation to prove to me that He knows who I am, that He alone can work out the toughest challenges in our lives. He knew I had to get home to fulfill commitments in the church. I asked and He answered.

There are times when we have to take God at His word when He says He will make a way in the wilderness when there is no way. We have to physically move forward, taking up our baggage, trusting that He is who He says He is.

Was the gentleman in the airport who took me out of the crowd an angel? I don’t think so. He was looking in the crowd for someone to put on the flight. God helped him to pick me.

We miss out on so many blessings when we say, “The situation is impossible.” We must come to the realization that our God is a God who transcends the impossible. We need to step out in faith, knowing He hears our cry.