A Tribute to Single Mothers 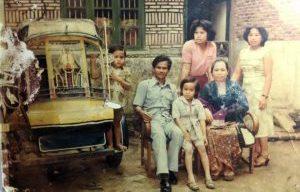 I want to tell the story of a single mother who happens to be my best friend. This is just one story but I am sure it is the story of thousands that are similar. My friend married when she was just eighteen years old, a man nine years her senior. Shortly after they began their married life together she found out that she was expecting their first child. Then, after seven months of excited expectation and preparation, she received the earth-shattering news: her baby, the child she had prayed for and carried, was dead. She and her husband reacted very differently to this tragedy and that was, so to say, the beginning of the end.

Five years after this she and her husband were given a beautiful, healthy baby boy, followed nineteen months later by another. Although this couple was blessed with lively healthy children, their marriage was by now definitely on the rocks. My friend was doing everything she could, for her children’s sake to hold her family together. Two years later she found out that she was expecting again, a child her husband never wanted. But she held on, determined to accept this child as the gift that it was. She was given a beautiful, bouncing baby girl. Unfortunately, some months after her daughter was born, her marriage was broken beyond repair. Her husband left and they divorced. Within the year he remarried and three years later he disappeared from their lives completely.

Abandoned with no support or financial aid, she made attempts to locate her ex-husband, hoping that he would want to be part of his children’s lives. Unfortunately these enquiries led to yet another tragedy when she was finally told by authorities that her children’s father was dead. She now was not only left to raise her children alone, but she had to find a way to help and guide her three young children, (by now nine, seven and four respectively), through the grief and pain of their father’s death, as well as dealing with her own grief.

With no qualifications to her name and no family nearby to help her practically, she had a hard time finding and holding a job. When she did have a job there was no one to be there for her children when they needed looking after. She relied on relatives, charity and benefits to keep her head above water, often having to humble herself to ask for help or depriving herself to make sure there was enough for her children.

A few years later she moved with her children back to the town of their birth. Yet again fate added another twist to her tale: here she found out, after four years, that her ex-husband was very much alive and living across town from them. She again summoned all of her strength and courage and contacted him in hopes that he would want to see his children. He didn’t, so she soldiered on alone.

As her children began entering their teens things progressively got worse. She was subjected to bitter heartache as both her sons displayed the emotional and social scars of their father’s abandonment: suicidal inclinations (one almost to the point of being institutionalized), bullying, sickness, depression, low self-esteem, and so on. But she never stopped fighting for her children, never stopped praying, and never stopped loving.

Through every obstacle and hurdle life put in her path she doggedly held on to her faith and her firm trust in the promise that God would not ask more of her than she was capable of giving, and would not ask her to bear more than she was capable of carrying. She fought daily to instill in her children the values and morals her own childhood had lacked. She was always brutally honest about her mistakes and failings in hopes that her children would learn from her life and long for more. She gave every ounce of strength she had to support her children both inwardly and outwardly, always encouraging them, not to be the best but to be their best.

Her children are all in their twenties now and have gone their own ways. She no longer has contact with her sons. That’s just the way it’s turned out. But her mother’s love for them will live on. She will never give up on them, never stop hoping, never stop praying – they are her sons. And they will always remember her love, the childhood she so valiantly strove to give them, and the endless self-sacrifice she endured for them. They will appreciate it one day. I know, because this is my mother’s story. I am her fourth and youngest child and am only just beginning to realize all that she has done for me and my brothers in the twenty years since our father left us – all that we owe her.

So to all those whose lives are similarly playing out, who may wonder if their children will ever appreciate what they are doing or hold it against them, I say never give up. One day your children will appreciate the gift that they have in their mother. It may take years (it’s taken me almost twenty), and unfortunately you may never see it, but one day they will appreciate you and take the chance to say what every mother’s child should say: “Thank you, Mom.”