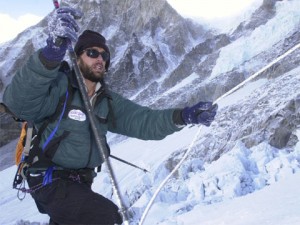 The year Erik Weihenmayer became the first blind person to conquer the tallest mountain in the world. Led by his close friends, and roped, Erik jumps crevasses to reach the summit.

When asked about this feat, he said, “I was confident I could do as well as anyone who goes to that mountain. And I knew I could turn back gracefully if necessary.” Just 5 years before this achievement, 15 climbers died in a storm that trapped 3 groups near the summit. It was Everest worst death toll for a single year.

Despite the tragedy and being criticized as a potential liability for his team, Erik said:

“… I refused to be the weak link of the team. I wanted them to put their lives in my hands as I would put mine in theirs. I would carry my share. I would contribute as any other team member. I would not be carried up to the mountain and spiked on top like a football. If I were to reach the summit, I would reach it with dignity.”

Nicknamed Super Blind or Blindenheimer by close friends, this ex school teacher is not only the first blind person to summit Mount Everest but also one of only about 100 people to successfully summit the highest peaks of the world’s seven continents.

In 2004, Erik and Everest team members went to Tibet to train blind students on a climb to the Rombuk Glacier on the north side of Mt. Everest.

In a country that believes that blindness is a sign that evil spirits are present – Erik challenge the local superstitions.

Erik said, “These were blind kids who were told they had evil spirits inside them, kids who were tied to beds in dark rooms, kids who were sold in and out of slavery.” Once treated like lepers, the pupils of Sabriye Tenberken (also blind) ultimately stood together at 21,500-feet – higher than any other team of blind people in history.

When he’s not climbing or at home with his wife, Ellie and daughter, Emma, Erik is usually at a speaking engagement. He still climbs approximately 50 days a year.