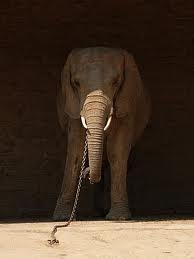 Most people are like the circus elephant. Have you ever seen a giant elephant in an indoor arena tied to a little wooden stake. That huge creature can pick up two thousand pounds with its trunk, yet it calmly stays tied. Why?

When that elephant was just a baby, and not very strong, it was tied by a huge chain to an iron stake that could not be moved. Regardless of how hard it tried, it could not break the chain and run free. After it a while it just gave up. Later, when it is strong, it never attempts to break free.

The “imprint” is permanent. “I can’t! I can’t!’ it says. There are millions of people who behave like this creature of the circus. They have been bound, tied and told “You’ll never make it,” so many times they finally call it quits. The may have dreams, but the “imprinting” keeps pulling them back. Today, eliminate the source of your limitations. When you mentally break free, the boundaries will be removed from your future.