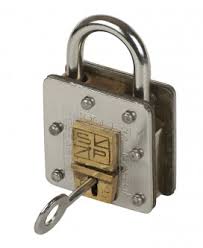 Houdini was the greatest magician during his time. He was also a fantastic locksmith, and boasted that he could escape from any jail cell in the world in less than one hour. A small town in the British Isles built a new jail and issued Houdini the challenge.

Houdini loved challenges and there was a prize money offered, so he accepted the challenge. When the big day arrived, there was a large crowd present and the media was also there to cover the special event. Houdini confidently walked into the cell, and the door was closed. He immediately took off his coat and went to work.

Hidden in his belt was a flexible, yet tough and durable ten-inch piece of steel, which he used to work on the lock. At the end of 30 minutes, his confidence disappeared. At the end of an hour, he was soaked in perspiration. After two hours, Houdini literally collapsed against the door – which opened! The door had never been locked, except in Houdini’s own mind. which meant that the door was as firmly locked as if a thousand locksmiths had put their best locks on it. Houdini could have unlocked any physical locks, but not the lock that was in his own mind.

Just like Houdini, our locks are in our own mind and prevent us from getting out of our “jail”. Most of us are in a “mental prison” and in order to break out, we need to realize and admit it, and just give it a little push.