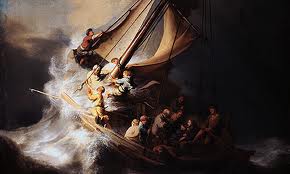 Years ago, in a small fishing village in Holland, a young boy taught the  world about the rewards of unselfish service. Because the entire village revolved around the fishing industry, a volunteer rescue team was needed in cases of emergency. One night the winds raged, the clouds burst and a gale force storm capsized a fishing boat at sea. Stranded and in trouble,the crew sent out the S.O.S. The captain of the rescue rowboat team soundedthe alarm and the villagers assembled in the town square overlooking the bay.

While the team launched their rowboat and fought their way through the wildwaves, the villagers waited restlessly on the beach, holding lanterns tolight the way back. An hour later, the rescue boat reappeared through thefog and the cheering villagers ran to greet them.

Falling exhausted on the sand, the volunteers reported that the rescue boat could not hold any more passengers and they had to leave one man behind.

Even one more passenger would have surely capsized the rescue boat and all would have been lost.

Frantically, the captain called for another volunteer team to go after the lone survivor. Sixteen-year-old Hans stepped forward. His mother grabbed  his arm, pleading, “Please don’t go. Your father died in a shipwreck 10  years ago and your older brother, Paul, has been lost at sea for three  weeks. Hans, you are all I have left.”

Hans replied, “Mother, I have to go. What if everyone said, ‘I can’t go, let someone else do it?’ Mother, this time I have to do my duty. When the call for service comes, we all need to take our turn and do our part.” Hans kissed his mother, joined the team and disappeared into the night.

Another hour passed, which seemed to Hans’ mother like an eternity.  Finally, the rescue boat darted through the fog with Hans standing up in  the bow. Cupping his hands, the captain called, “Did you find the lost man?” Barely able to contain himself, Hans excitedly yelled back, “Yes, we found him. Tell my mother it’s my older brother, Paul!”