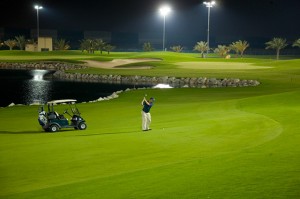 Charlie Boswell has always been one of my heroes. He has inspired me and thousands of others to rise above circumstances and live our true passion. Charlie was blinded during World War II while rescuing his friend from a tank that was under fire. He was a great athlete before his accident and in a testimony to his talent and determination he decided to try a brand new sport, a sport he never imagined playing, even with his eyesight . . . golf!

Through determination and a deep love for the game he became the National Blind Golf Champion! He won that honor 13 times. One of his heroes was the great golfer Ben Hogan, so it truly was an honor for Charlie to win the Ben Hogan Award in 1958.

Upon meeting Ben Hogan, Charlie was awestruck and stated that he had one wish and it was to have one round of golf with the great Ben Hogan.

Mr. Hogan agreed that playing a round together would be an honor for him as well, as he had heard about all of Charlie’s accomplishments and truly admired his skills.

“Would you like to play for money, Mr. Hogan?” blurted out Charlie.

“I can’t, what would people think of me, taking advantage of you and your circumstance,” replied the sighted golfer.

“Okay,” blurted a frustrated Hogan, “but I am going to play my best!”

“I wouldn’t expect anything else,” said the confident Boswell.

“You’re on Mr. Boswell, you name the time and the place!”