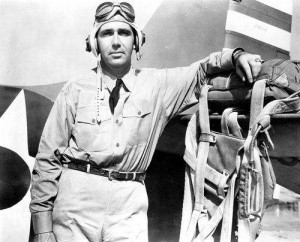 During the course of World War II, many people gained fame in one way or another. One man was Butch O’Hare. He was a fighter pilot assigned to an aircraft carrier in the Pacific. One time his entire squadron was assigned to fly a particular mission. After he was airborne, he looked at his fuel gauge and realized that someone had forgotten to top off his fuel tank. Because of this, he would not have enough fuel to complete his mission and get back to his ship. His flight leader told him to leave formation and return.

As he was returning to the mother ship, he could see a squadron of Japanese Zeroes heading toward the fleet to attack. And with all the fighter planes gone, the fleet was almost defenseless. His was the only opportunity to distract and divert them. Single-handedly, he dove into the formation of Japanese planes and attacked them. The American fighter planes were rigged with cameras, so that as they flew and fought, pictures were taken so pilots could learn more about the terrain, enemy maneuvers, etc. Butch dove at them and shot until all his ammunition was gone, then he would dive and try to clip off a wing or tail or anything that would make the enemy planes unfit to fly. He did anything he could to keep them from reaching the American ships. Finally, the Japanese squadron took off in another direction, and Butch O’ Hare and his fighter, both badly shot up, limped back to the carrier.

He told his story, but not until the film from the camera on his plane was developed, did they realize the extent he really went to, to protect his fleet. He was recognized as a hero and given one of the nation’s highest military honors. And as you may know, O’Hare Airport was named after him.

Prior to this time in Chicago, there was a man called Easy Eddie. He was working for a man you’ve all heard about, Al Capone. Al Capone wasn’t famous for anything heroic, but he was notorious for the murders he’d committed and the illegal thing’s he’d done. Easy Eddie was Al Capone’s lawyer and he was very good. In fact, because of his skill, he was able to keep Al Capone out of jail.

To show his appreciation, Al Capone paid him very well. He not only earned big money, he would get extra things, like a residence that filled an entire Chicago city block. The house was fenced, and he had live-in help and all of the conveniences of the day.

Easy Eddie had a son. He loved his son and gave him all the best things while he was growing up; clothes, cars, and a good education. And, because he loved his son he tried to teach him right from wrong. But one thing he couldn’t give his son was a good name, and a good example.

Easy Eddie decided that this was much more important than all the riches he had given him. So, he went to the authorities in order to rectify the wrong he had done. In order to tell the truth, it meant he must testify against Al Capone, and he knew that Al Capone would do his best to have him killed.

But he wanted most of all to try to be an example and to do the best he could to give back to his son, a good name. So he testified. Within the year, he was shot and killed on a lonely street in Chicago. These sound like two unrelated stories, but Butch O’Hare was Easy Eddie’s son.