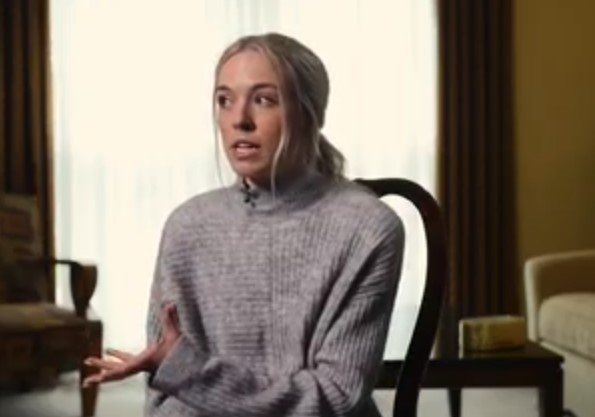 “She just—she loved being on the ice…she loved—she made great friends…she never wanted to miss practice, and it just really became an important part of her life,” says Jennifer.

Jennifer Thacker put her daughter, Katherine, in skating lessons when she was a young girl. It gave her a way to focus her emotions and energy.

“It was always an outlet for me, something about being on the ice,” says Katherine. “I would have a hard day at school and then I could go to the rink and, you know, work my hardest and achieve my goals and be freed emotionally,” says Katherine.

Just under the surface Katherine was dealing with hatred and unforgiveness. When she was just 18 months old her father, Brandon, a Kentucky law officer, was shot and killed in the line of duty. Jennifer remembers getting the horrible news that day in 1998.

“I opened the door and saw three people standing there and that’s when they delivered the news and said Brandon had been shot on the parkway,” says Jennifer. “And I asked, ‘Is he alive?’ and he said ‘No, he’s dead.’ It’s like being hit by a mack truck—a blow that you can’t even imagine,” says Jennifer.

Katherine was left with a void in her heart and deep questions about God.

Katherine built-up a wall of anger between herself and God.

Her anger and hatred for the man affected her entire life and she knew it.

“There’s a reason I’m here. There’s a purpose for me,” says Katherine. “And if I keep going on this track and keep letting anger consume my heart, then I’m not going to get to experience that…I’m going to miss out on what life holds for me. And so that was kinda’ when I started realizing that something needed to change,” says Katherine. “I just didn’t know what that was.”

Katherine distanced herself from her mom’s Christian faith, but her junior year in high school went to a Christian summer camp and connected with the guest speaker.

“It was apparent that he had some sort of joy that I wanted…he just looked me dead in the eye and said, ‘God is your father, and he desires you and he wants you and he’s fighting for you.’ And that’s all you need…throughout the week my wall that I had built up all of these years between God and I—I started to take bricks down from it and realized, ‘Oh I assumed that if I built up this wall, God would be long gone. He’d be so far gone,’” says Katherine. “And I realized that once I took it down, he’s right there. He didn’t leave or walk away. He was on this other side and without me even knowing it, he was fighting this war for me and for me heart and for my life,” says Katherine.

Katherine became a Christian that week.

“God started working in my heart and saying, ‘Is your anger towards him helpful? Is it helpful to you or him?’” says Katherine. “And the answer was, ‘No, it’s not. It’s consuming me. It’s consuming my thoughts and my heart. It’s blocking out parts of my heart that God could easily fill-up,” says Katherine. “And so, through a lot of prayer, I was able to fully forgive the man who killed my dad. I hold no grudge against him…my prayer went from ‘Oh, I hope these bad things happen to him’ to ‘I hope he knows Jesus and I hope that he can experience that forgiveness too because he’s a sinful human and so am I,’” says Katherine.

The letters that were once so full of hate have also changed and found a new audience. While in college, Katherine started ‘Words of Worth,’ a Christmas time letter-writing campaign to families of law enforcement who have lost a loved one while in the line of duty.

“Just reaching out to a family and saying, ‘Hey, you’re thought of. God cares about you. God loves you. He sees you. And we love you and we hope you have a good Christmas,’” says Katherine. “I know for my family, getting handwritten letters in the mail just to say, ‘Hey, we’re thinking of you…We are thankful for his sacrifice.’ Those kinds of letters meant the world to me,” says Katherine.

Jennifer says she is thankful for God’s presence in her daughter’s life and is proud of the compassion that has risen out of a broken heart.

“She has opened her heart to listen to the Holy Spirit leading her and following,” says Jennifer.

“Knowing the transformative power that walking side-by-side with Jesus gives you is incredible,” says Katherine. “And so, we hope that other people can experience that too.”

“To see the goodness that can come,

Forgiving the Man Who Killed My Father (https://www1.cbn.com/video/HOL121v2/forgiving-the-man-who-killed-my-father?show=700club)