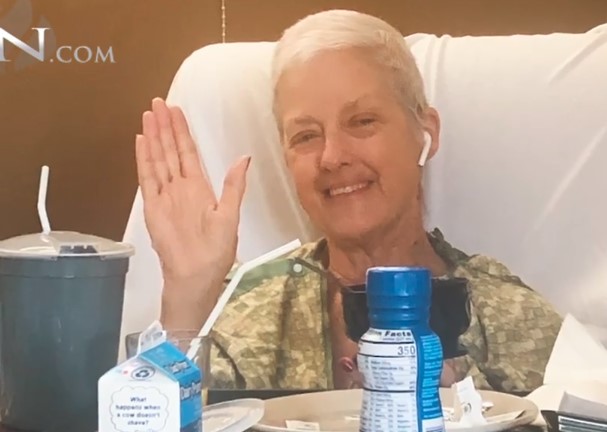 Lifelong friends Joyce Partenheimer and Shari McRae were on a scrapbooking retreat, celebrating Joyce’s recent victory over breast cancer and Shari’s recovery from knee replacement surgery. But it hadn’t been the celebration they hoped for. All week, Joyce struggled with stomach pain. Then, that Friday…

“Joyce woke me up at about three o’clock in the morning,” Shari recalls. “She was in agony. I mean, she was just crying out in pain, writhing in pain.”

Shari rushed her to the ER at Grand Strand Medical Center, ten minutes away.

“I was praying aloud the whole ride and just asking Jesus to help us.”

Joyce was taken in for a CT scan, given pain meds, and kept in the ER for observation.

“When six o’clock in the morning came and we still were not any further in terms of getting her relief, I called her husband, Kim,” Shari says.

Kim remembers getting the call that morning. “She said, ‘Kim, Joyce is not doing well. She’s got intense stomach pain, and I think you really needed to come up here quick.’ So, I packed a bag for the weekend, not knowing what was wrong.”

Kim arrived later that morning and Joyce was admitted that afternoon. By then, trauma surgeon, Dr. Jason Farrah, had been assigned to her case. After taking one look at her scans, he rushed Joyce in for emergency surgery.

“She ended up having a perforated gastric ulcer and spilling, you know, intestinal contents in her abdomen and having sepsis,” Dr. Farrah recalls. “I didn’t know if it was too late, honestly.”

After three hours in surgery…

“Dr. Farrah came up the hall and he looked like he’d lost his best friend,” Kim remembers. “And he said, ‘I have never seen the extent of damage as I have tonight. It goes from above her sternum down below her belly button.’”

“You can’t survive without your small intestine, for instance, and in this case, we’re talking about the whole length of the intestine,” Dr. Farrah notes. “She was wildly unstable in the operating room. So, she needed all the infection washed out, the hole sealed, and an assessment of what was in the abdomen and no more. This is a really tough spot she was in. She was just fighting for her life.”

Dr. Farrah sent Joyce to the ICU on antibiotics and a wound vac and scheduled another surgery for Sunday to remove the dead bowel. Meanwhile, Joyce’s family continued to gather, as her two sons and daughters worked to get everyone they knew praying.

“I thought we were going to see an unsurvivable situation, I really did,” Dr. Farrah says. “I worried that there would be some recovery of the bowel, but I thought it would be to a point that would not sustain her life moving forward.”

The family asked him for a best-case scenario.

When Dr. Farrah went back in…

“There was no dead bowel that we had to remove. There was almost a complete reversal of the physiologic process that was going on there, and I was pretty ecstatic about that,” Dr. Farrah smiles.

Kim remembers getting the news. “He said, ‘I-I didn’t do this. I couldn’t have done this. There was no way I could do anything like this. God touched your wife and healed her.’”

“It’s a fact that they prayed for a specific outcome and when I came out and gave them the report it was literally and specifically what they had prayed for,” Dr. Farrah confirms.

But Joyce’s fight wasn’t over; chemo and the ulcer had left her body even weaker. Twice, she coded when doctors tried to take her off the vent.

“That was a big, big problem for her,” says Dr. Farrah. “It was a very difficult road because she’s so far behind the eight ball physiologically.”

For the next eight days, her family and friends continued to pray. Then on November 4th, Joyce woke-up and was safely taken off the ventilator. Shari remembers talking to her friend via Facetime that day.

“That was one of the most joyous moments for me of the whole thing, just actually being able to see her face and hear her voice and talk to her. She looked at me and she said, ‘Our lives are so intertwined,’ and at that point was when I really knew she’s going to be okay,” Shari remembers.

“We were just thankful that he was kind and generous to touch Joyce and give her back to us,” Kim agrees.

Joyce was transferred to a regular room the next day and went home that weekend!

“We had Thanksgiving here and it was special. It was really precious,” Kim says.

Joyce is doing great these days. She knows firsthand the power of prayer.

“I am 100%! I am. I feel like I felt twenty years ago,” Joyce declares. “God can restore. God has healed and I believe my desire is to make Jesus famous.”

Kim says he knows one thing is certain: “The importance of prayer was demonstrated to me in a very visual way. You can read about it, but when you live it, that’s when things really stick.”