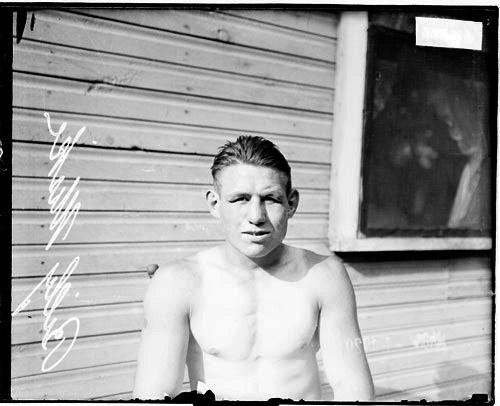 The 2010 class of the International Boxing Hall of Fame in Canastota includes Billy Miske, “The St. Paul Thunderbolt,” who fought against Jack Dempsey in 1920 while suffering from Bright’s Disease. Miske’s last fight in 1923, when he had only weeks to live, is the stuff of legend.

“Well, Billy isn’t about to face his wife, Marie, and their three young kids, Billy Jr., Douglas and Donna, tapped out for his last Christmas, so he goes to his longtime manager, Jack Reddy, and asks him for one last fight. Reddy says no chance. “I don’t like to say this,” Reddy tells him, “but if you went in the ring now, in your condition, you might get killed.”

“Billy was far too ill to train for the fight. When newspapermen and boxing fans asked why he wasn’t working out as usual at the Rose Room gymnasium in St. Paul, Reddy explained that Miske had a gym rigged up at his summer place on Lake Johanna and would do all his training there before leaving for Omaha to work out in public. “Actually, Billy was spending most of his time in bed, saving his strength. He left for Omaha only a few days before the fight.”

So, Miske’s final fight was set. He would face hard-hitting Bill Brennan, who went 12 rounds with Dempsey, on November 7. Leading up to the fight, Miske can’t even leave bed to train. He never sets foot in a gym or touches a pair of gloves until the bout.

Amazingly, Miske makes it to the fight and knocks out Brennan in the fourth round. The fight netted Miske $2,400, and he was able to give his family the best Christmas of their lives. Just 55 days after the fight, Miske died of kidney failure.

“Billy Miske was one of the greatest fighters to ever lace up the gloves, but you don’t have to be a boxing fan to admire what this man did,” boxing historian Jake Wegner once said. “Miske leaves a legacy of raw courage, of hope for what is possible for people while they are sick–for what you can do while you are sick–even terminally sick. He leaves behind a role model for fathers, husbands and for fighters.”