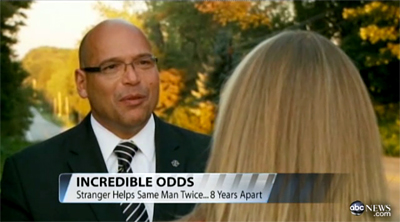 In a turn of events described as “miraculous,” an Ohio man helped the same stranger twice in the span of eight years, most recently in a potentially deadly situation last weekend.

It was late Saturday night on a country road near Chagrin Falls, about 20 miles east of Cleveland, when Christopher Manacci and his wife were driving home from watching their son’s football game for Case Western Reserve University and noticed a van, towing a boat, moving very slowly.

“I passed him and, for whatever reason, I noticed his front-left tire looked flat,” Manacci told ABC News. “I dropped my wife off at home and said, “I’m going to take the guy a can of Fix-a-Flat. It’s 11 o’clock at night in a rural setting, so there’s not a lot of places to go. There are no tire stores, no anything. When I returned, I pulled behind him about 100 feet away, completely off the road and went up to ask him if he wanted to use the Fix-a-Flat for his tire, which I noticed was shredded. He and his son were outside the van evaluating the tire.”

Suddenly, a pick-up truck, whose driver turned out to be allegedly drunk, came tearing down the road, smashing into Manacci’s car.

“We didn’t even see this truck until it impacted the car,” Manacci recalled. “It strikes my vehicle and causes the truck to go up on the left two wheels, airborne, missing this guy and his son by about three feet.

“The guy looks at me and goes, ‘What just happened?’ I just said, ‘Thank God he hit my car.’ Because had he not struck my vehicle, he would have struck this guy and his son head-on at 50 miles per hour.”

That was when a strange situation became even stranger. Gerald Gronowski, the owner of the van who was returning from a lake fishing trip, asked Manacci what kind of work he did. When Manacci replied that he is a nurse practitioner at Case Western’s School of Nursing, Gronowski recounted an incident that had taken place eight years earlier.

“He tells me about this story where he was fishing on that same lake,” Manacci said. “His son at that time was on the dock where you launch the boats and I heard him say, ‘Is anybody here a doctor?’ I was kayaking with my son on the lake. His son says, ‘My dad’s hurt really bad.’ I say, ‘Let me take a look at him.’ He had three [fishing hooks] hooks deep in the palm of his hand, deep into the tissue of his hand. Fortunately, I had with me a medical kit to remove this hook out of his hand without causing any more extensive damage.

He thanked me for that last time and says, ‘You know, there’s no doubt, tonight you saved my life.’ I said, ‘I didn’t, but I guess my Lexus did.'”

The remote chances of Manacci helping Gronowski twice in eight years were not lost on the two men.

“To have this perchance meeting a second time when he was in significant danger and for me to play a small role in the outcome, it’s a blessing,” Manacci said.

“I’m a nurse practitioner and in 30 years I’ve done helicopter rescues and jet rescues in every place across the globe, so coming to help people is part of my DNA , I guess,” he said. “Of all these things, I probably know the least about mechanics, but I do know when somebody’s in trouble and that was the sense I had [Saturday].

“It’s really quite a miracle if you think about it, a miracle that I was a part of,” he said. “And it’s a miracle for that [alleged] drunk driver since he does not have to live with the horror of knowing that he killed a family. No matter how you look at it, it’s really quite amazing. For me, well, you know, I’m just a small piece of it.”

As the two men stood by the side of the road Saturday in disbelief about what had just transpired, Gronowski offered to take Manacci fishing to thank him for his help.

“I said, ‘No disrespect, but given the luck you have surrounding the fishing,” Manacci said he replied, “It’d be better off if we went bowling.

“And I said, ‘I want to be clear that I limit rescues to two times per person in a lifetime.”