Eulogy for my Dad 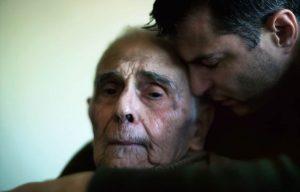 First off, I would like to say thanks to my mom for being there for my dad every step of the way…I mean every step.

He was lucky, and so are we, to have you.

Thanks to all our family and friends for all your prayers and support.

My dad was in really rough shape for quite a few years. I would tell my brother, Tom, that it was like he was being held together by duct tape and bubble gum. We wanted him to stay with us but it tore us up to see him suffering without being able to help him.

The other day my brother Paul was holding my dad’s hand and telling him: “Dad, let go, let go…”

Dad looked up at him and repeated those words “Let go, let go…”

That was my dad.

He was Archie Bunker and Frank Barone (of “Everybody Loves Raymond”) wrapped up into one. Like Archie, he had a rough exterior but under the tough surface, he was kind, caring, and never malicious.

I saw his kindness when, during a huge storm, a semi-truck was stranded near our house. He invited the driver – a complete stranger – into our home and gave up his own bed for two days.

My dad was never a person to express in words his love for us, but he always showed it by his actions.

Just one more thing: That last day, I really thought he could pull through. He did it so many times before, why not once more? He was the ultimate “energizer bunny” – he just kept going…

Later that night I realized that in order for him to let go, that WE all needed to let go. Because he was making sure that Mom and us kids were safe before he could move on. That’s just what dads do – they put the family first before they think about themselves. That’s what dads do, right?

So, it was around 1am, and the nurse and I were watching over him when the nurse got a real concerned look on her face.

I sat next to him and held his hand.

I talked to him a lot, and I told him some things. I told him: “You’re the toughest guy I ever knew – the toughest…” and I know a lot of tough people.

I told him he was going to be one of God’s best soldiers.

I told him that the kids were going to take care of Mom – right kids? For sure, for sure…