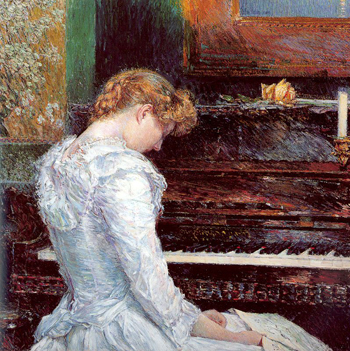 A few days after my dad died, my sister Cathy called and said, “Dad had a request for you to play some music at his funeral. Would you be willing to do it?”

I figured she was going to tell me about some hymns he was particularly fond of. But what she said next took me totally by surprise. She said, “He’d like you to play Clair de Lune!”

She said, “Yup. That was the piece he asked for.”

I said, “I didn’t think he even knew the piece, let alone the title!”

She said, “Apparently he did, and he asked that you play it during Communion.”

Then I thought, “Clair de Lune?” I had not played that piece since I was 18 and back then it was one tough cookie. The mere mention of it drew me straight back to the living room of my childhood home on Dixon Avenue. I saw myself practicing at the piano, with dad listening from his favorite chair in the den, a little alcove just around the corner.

Every night after dinner dad would wander into that den, which was an appropriate name for the room. It really was a den, a cave where dad settled into his favorite chair like an old lion.

He loved music. Only his idea of a classic was Glenn Miller. He really enjoyed the likes of Nat King Cole and Lena Horne and of course, Frank Sinatra. He had a good sized collection of LP’s and a decent hi-fi set. So every night he’d put a stack of records on the turntable, relax in that chair of his, and listen.

Now, it didn’t take the mind of an Einstein to figure out that his lounge time was definitely not the time to practice the piano in the living room. So when I was young, if I was going to make any kind of music, I headed for the basement. There was this old upright piano in the game room down there and I played the daylights out of it. In fact, you could say I spent most of my musical gestation in that room on that piano. I didn’t graduate to the living room until I was reasonably accomplished as a pianist and even then I harbored a twinge of guilt for horning in on the old lion’s den time, though he never once complained about it. He would sit in his chair reading the newspaper and listening. Listening… but for what I don’t know. Half of the time what I was playing didn’t even make sense to me so he couldn’t possibly have known what I was striving to master. I was doing major doses of Beethoven Sonatas, Bach Fugues, Chopin Etudes and not one morsel of Gershwin or Cole Porter. He had to be one lost soul awash in a clamor of crescendos, scales, and arpeggios.

I wasn’t aware of it at the time, but all the while he was listening as I fumbled through the notes of sonatas, listening to etudes and concertos, listening to me working my fingers into a frenzy, trying my best to learn enough music to make a respectable appearance at my weekly lessons with Joe Esposito.

Clair de Lune was not one of my lesson pieces. I heard it one day on the radio and I fell in love with it at once. I just had to learn it myself. It would be the first piece of classical music I had mastered without the aid of my teacher. I drove to the music store and bought the music. That was the easy part, learning it was another story. It was a tricky piece that required the lightness of a butterfly on the keys, and my touch seemed more like that of a jack hammer.

I had my work cut out for me. I went at it with the discipline of a soldier and the passion of an artist… note by note, color by color. I learned the whole thing by myself. It took months. Dad must’ve listened to it all.

Which brings me back to Cathy’s phone call. Dad’s request gave me a minor anxiety attack that whisked me back 40 years to my childhood home, slaving away at those notes, trying to master the music and make it into something Debussy might actually enjoy hearing.

Right after I hung up the phone I went over to my piano and prepared myself to slave away at the piece again. I dug through my pile of music and found the Debussy book. It had been a long time… a very long time. I put the music on the stand, opened it up, and began to play. I actually surprised myself. Apparently, 50 years as a pianist does something to the hands. My fingers found their way automatically to the keys. Just like riding a bike after a long hiatus, the music came out of my fingers as naturally as breathing, I hardly needed to look at the music. When I played it for dad’s funeral, I hardly needed to look at it then. It’s a good thing because I couldn’t see it very well through my tears.