Treasures of the Past 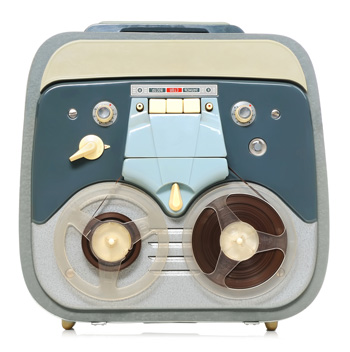 I was pleasantly surprised one day when I uncovered a virtual goldmine of reel to reel tapes, and an accompanying tape player while helping my parents in a pre-holiday season clean up.

I found them in a basement cupboard, and asked my father if he would mind my listening to them. He said, “Have at it, who knows what you’ll find.”

The first few reels were taped symphonies from old radio shows from 1949 through 1954. I also discovered taped broadcasts of Lyndon Johnson addressing the Vietnam War, Eisenhower’s Inaugural address, and a radio sermon my father preached in 1960.

The most fascinating tapes I dug out were tapes with old family friends long deceased) and my father’s mom and dad. One in particular was a taped discussion on September 11, 1951 at the home of their friend Tom Seller. Mr. Seller introduced the conversation and said, “Well, at long last I’ve succeeded in getting the Fred Russell’s over here, and now were going to hear from them, take it away Fred.” You could hear rustling on the tape as my Grandfather took the microphone and said, “This is Fred Russell here in the living room of Tom and Eda Seller. We’ve been sitting here for the last thirty minutes scandalizing people when Tom turned on this machine to get it on tape. I guess we need to watch what we’re saying now.” This was followed by laughter and then my grandmother started talking about her friendship with the Seller’s and how much they value them.

It was so strange to here my grandma’s voice as I do not remember it. I only have one, vague memory of her serving me ice cream and windmill cookies in her kitchen on Stansbury Street in Detroit in 1963. She passed away when I was four years old (1964), so my memories of her are simply not present to me. I have to reiterate how strange it was to hear her voice come through that tape machine. I kept replaying it over and over just to listen for the voice inflections and to see if it would trigger any other buried memories. I even placed my hand on the speaker to feel the vibrations of their voices. I deeply miss not having had the chance to get to know her. I did get the chance to spend a couple of years with my grandfather when he came to live with us in 1980. He died in May of 1981 at the ripe old age of ninety-seven.

My grandfather lived a fascinating life to-say-the-least. He was born in 1885, and when he turned seventeen he bought himself a horse, a colt 38 revolver, a 30-30 Winchester rifle, and rode the trail west to Montana to be a cowboy. He returned after a few years to hold a job for fifty years with the New York Central Railroad as Road Foreman in Michigan. In 1927 he was involved in a dangerous train wreck in Lapeer, Michigan. He jumped from the cab of his locomotive which was traveling at over sixty miles per hour. I marvel at how he evaded death, but also the fact that had he died, my existence would not be. Pardon the rabbit trail.

Memories are wonderful things for us to stay in touch with our heritage. This subject is covered in detail by the writer Frederick Buechner. He wrote a heart warming book a few years ago titled, The Longing for Home: Recollections and Reflections. He wrote this book on the approach of his seventieth birthday as a reflection on his memories of the home in which he grew up, the books he read there, and the people he knew and loved. Here is what he has to say about time passing.

“When I was in my fifties and early sixties even, I deluded myself with the fantasy that I was still somehow middle-aged and had roughly as much time left to live as I had lived already, which seemed endless enough for all practical purposes. But now that I find myself pushing seventy hard, I have finally begun to wise up. It is no longer just in my mind that I know I am rather a good deal closer to the end of my time than I am to its beginning. I know it in my stomach and there is a lot of sadness in knowing it. But that is by no means all there is. Who would want it to be day forever and never night, after all? Who would choose to be awake forever and never get a chance to sleep?”

I share this sentiment with Buechner, though I am much younger than he. I find myself reflecting a great deal more about my life and I am more aware of time passing quickly. I often think about the home of my youth, family, and the influences that helped to mold me. I think this is a natural process we all go through, and it seems to demand we get our houses in order and seek more wisdom and insight. Buechner sums it up this way. “….it is true what they say: The older we grow, the more we find ourselves returning to the day when we were young.”

Buechner points us in the right direction with these comments about reflecting on our past. This is quite different than living in the past, however. Living in the past is like pushing a rewind button on a video player. To do so will eliminate any of the wisdom and insights we’ve gained since. People that live in the past, as opposed to reflecting on the past, have either failed to grow as individuals, or they’re living in denial of the present.

The discovery of these tapes has revealed a number of blessings to me. It’s made me realize the importance of these treasures in gaining knowledge of who I am, and the forces that helped to shape me. It’s also a sobering reminder of the brevity of life. It’s been fifty-three years since Mr. Seller recorded my Grandparents, and if I add that amount of time to my current age; I wind up at ninety-seven years old. That was my grandfather’s age when he passed away.

Hearing these tapes motivates me to search for other recordings that may be hidden from sight. All the evidence, however, seems to indicate that what I have in my possession, is all that exists. Sad though it may be, there is always a redemptive way to look at it. I have the opportunity to record my own parents so that I can make we sure we have treasures to cherish long after they’re gone. I have been generating a series of questions for them to answer, and subjects to discuss on tape. I want them to recall what it was like during the Depression and War years. I am interested in recording the insights they’ve gained down through the years. I want my children to have recordings of their grandparents they can share with their own children some day. My son Weston started the process last week when he interviewed my mother about what life was like when she was growing up. The most thrilling aspect is that he recorded her on the same reel to reel machine that was used to record my grandparents.

I can’t think of a more valuable way to get children interested and enthused about knowing their heritage. When I played the recording of my grandparents for my children, their eyes widened and they said, “Is that Great Grandpa and Grandma Russell?” They sat and listened as though they were hanging on every word. Weston even placed his hand on the speaker and looked amazed as he felt the vibrations of their recorded voices.

We cannot afford to allow our family heritages to fade away with no documentation. The great value in having recordings, letters, photographs, diaries, and journals of our loved ones is the insight and wisdom contained in the contents. For over fifty years these recorded voices have been buried treasures, only recently uncovered. The insights and wisdom I have discovered in them is more valuable than anything money can buy.

These historical family treasures contain keys to our understanding who we are from those to whom we owe our existence.