These Students Dress as Princesses for Sick Kids 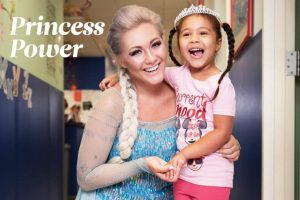 At an uncertain time, these young women offer kids a little magic—and hope.

“Elsa, it’s you!” It was a  four-year-old’s surprise birthday party,  and her favorite Disney character, Elsa from Frozen, had arrived. The two jubilantly began to sing the  movie’s big song, “Let It Go,” and were soon joined by Tinker Bell and four other fairy-tale princesses: Anna,  Ariel, Jasmine, and Snow White. You would swear you were celebrating at the most magical place on earth.

But this wasn’t Disney World.  It was the pediatric cancer ward at  a hospital on Long Island in New York. And the princesses were  college students who volunteer for  A Moment of Magic, a nonprofit  organization whose mission is to lift the spirits of sick children.

It all began once upon a time with  a family movie night featuring Frozen. Kylee McGrane, now 23, noticed that she and Elsa had matching blond hair and big blue eyes. McGrane and her friend Maggie Mc­Andrew, then both sophomores on service scholarships at the College of Mount Saint Vincent in New York City, were searching for  a new community project, ideally one with kids. That sparked an idea—dressing up as Disney princesses and visiting pediatric cancer patients. “When kids are in a hospital for so long, they don’t get all the magic that most kids do,” says McGrane. “It’s nice to give them time to be themselves.”

In 2015, after raising $2,000 on a GoFundMe page to pay for costumes and travel expenses, McGrane and McAndrew landed their first gig, at Cohen Children’s Medical Center  in New Hyde Park, New York. They dressed as Elsa and her sister, Anna, to the squealing delight of the girls and blushing smiles from the boys. They spent nearly three hours singing songs, taking pictures, and traveling from one bedside to the next until they had visited and chatted with every one of the 50 children. “To see the kids believe in me, my character … It was life-changing,” says McGrane.

Of course, a princess can work only so many miracles at once, so McGrane and McAndrew recruited their peers. Today, A Moment of Magic has 400 volunteers from  11 colleges around the country.

They also have a growing kingdom of fans. Shara Moskowitz from New Jersey says that her seven-year-old daughter, Avery, still talks almost every day by phone or text to the princesses she met nearly two years ago  at her birthday party. Avery was  receiving treatment for a neuroblastoma. “My daughter found something that she really needed to connect to,” says Moskowitz. “These girls gave her that moment of imagination, freedom, and happiness of dreaming.”