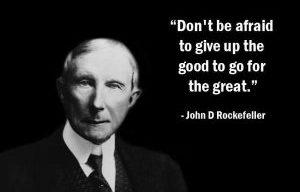 Standard Oil was once one of the biggest companies in the world, led by the famous John D Rockefeller. On one occasion a company executive made a bad decision. It cost the firm $2 million. This was the late 1800’s and $2 million was a huge sum.

Edward Bedford, a partner in the company had an appointment to see Rockefeller. When he entered Rockefeller’s office he saw his boss bent over a piece of paper, busily scribbling notes. When Rockefeller finally looked up he said to Bedford,  “I suppose you’ve heard about our loss? I’ve been thinking it over,” Rockefeller said, “and before I ask the man in to discuss the matter, I’ve been making some notes.”

Bedford looked across the table and saw the page Rockefeller had been scribbling on. Across the top of the page was the heading, “Points in favour of Mr __________.” Below the heading was a long list of the man’s good qualities, including notes of three occasions where he had made decisions that had earned the company many times more than his error had lost.

Bedford later said, “I never forgot that lesson. In later years, whenever I was tempted to rip into anyone, I forced myself first to sit down and thoughtfully compile as long a list of good points as I possibly could. Invariably, by the time I finished my inventory, I would see the matter in its true perspective and keep my temper under control. There is no telling how many times this habit has prevented me from committing one of the costliest mistakes any executive can make — losing his temper.”