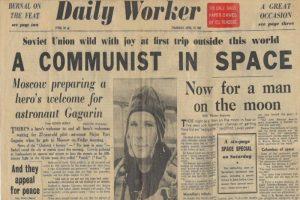 Yuri Gagarin is famous as the first man to fly in space. After the end of the Cold War some of Russia’s cosmonauts revealed the pressures under which he operated. Gagarin’s rocketship was armed with an explosive charge which could be detonated by radio signal. The Russians wanted to ensure Gagarin wouldn’t defect by re entering earth’s atmosphere anywhere but over Soviet territory.

So the explosives were rigged. The charges could only be disarmed and the rocket’s re-entry system activated by entering a six digit code into the onboard system. Gagarin was given the first three numbers. The last three were to be transmitted to him just before his retrorockets were to fire.

But where the Soviet government didn’t trust it’s cosmonauts, the head of their space program, Chief Designer Korolev did. Just before the rocket was launched Korolev pulled Gagrin aside and told him the last three numbers. Korolev had faith in Gagrin, a faith for which he was prepared to lay his job and his future on the line by whispering those secret numbers. And Gagarin didn’t let him down.

Source: based on an article in Popular Science, July 1999. (https://storiesforpreaching.com/category/sermonillustrations/trust/)