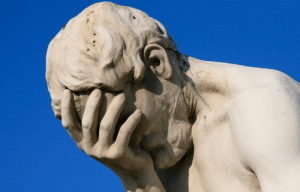 It was perhaps the greatest hoax in art history. Han van Meegeren was an artist with a grudge. Painting in the Netherlands pre World War 2, critics mercilessly panned his exhibitions. One critic described him as “A gifted technician who has made a sort of composite facsimile of the Renaissance school, he has every virtue except originality.” Stung, van Meegreen decided to strike back. He painted a work with flourishes of the style of the great Dutch artist Johannes Vermeer, titled it “The Supper at Emmaus”, and submitted it to the prominent critic Abraham Bredius. Bredius took the bait, writing that “It is a wonderful moment in the life of a lover of art when he finds himself suddenly confronted with a hitherto unknown painting by a great master… And what a picture! We have here a – I am inclined to say the – masterpiece of Johannes Vermeer of Delft.”  The art world gasped, the painting was sold for the equivalent of millions of dollars, and displayed in  the Boijmans Gallery in Rotterda.

Han van Meegren planned to expose the forgery at the opening of the Gallery’s 400 Years of European Art exhibition, in which his forgery was given pride of place. His critics would be humiliated and their reputations shattered. Greed, however, got the better of him. Rather than exposing the forgery, he made more, raking in millions more dollars. When the Nazis swept through Europe, he even managed to sell The Supper at Emmaus to them.

This almost proved his undoing.After the war the victorious Allied forces were determined to return the artworks collected by the Nazis to their previous owners. A receipy led two soldiers from the Allied Art Commission to the studio of vm Meegren. They wanted to know from whom van Meegran had bought the artwork. Unwilling to divulge the truth, van Megreen was arrested on charges of treason and faced the death penalty. Confined in prison, facing death, van Megreen had a change of heart. He confessed, but no-one believed him. Experts testified that the work was indeed an original by the Dutch master Vermeer. The only way to prove his innocence was to produce another fake, anfd so he did, spending weeks literally painting for his life!

The final twist to the story is that van Meegren was not only acquitted, but became a national hero, for he had fooled the Nazis, shown them to be the corrupt regime everyone knew they were.

information found in “The forger who fooled the world” The Telegraph, Aug 5, 2006