They Sent Me To Finish 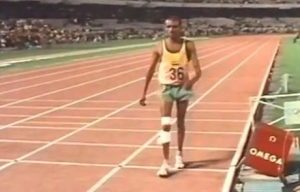 The Olympic Games, Mexico, 1968. The marathon is the final event on the program. The Olympic stadium is packed and there is excitement as the first athlete, an Ethiopian runner, enters the stadium. The crowd erupts as he crosses the finish line.

Way back in the field is another runner, John Stephen Akwhari of Tanzania. He has been eclipsed by the other runners. After 30 kilometers his head is throbbing, his muscles are aching and he falls to the ground. He has serious leg injuries and officials want him to retire, but he refuses. With his knee bandaged Akwhari picks himself up and hobbles the remaining 12 kilometers to the finish line. An hour after the winner has finished Akwhari enters the stadium. All but a few thousand of the crowd have gone home. Akwhari moves around the track at a painstakingly slow pace, until finally he collapses over the finish line.

It is one of the most heroic efforts of Olympic history. Afterward, asked by a reporter why he had not dropped out, Akwhari says, “My country did not send me to start the race. They sent me to finish.”