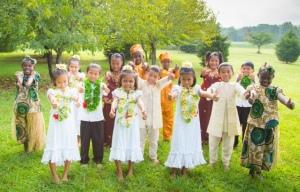 Atira was watching the TV show 20/20 in her living room in Seattle. The show was about a Nun, in Egypt, that was dedicating her retirement years to the garbage-dump-city in CAIRO.

Atira has an Egyptian import business. When she saw the show of the Nun and her works for the poor and homeless at the garbage dump city, Atira knew she had to help. Atira ordered the transcript from the TV show and set out to see what she could do to help.

Atira asked everyone coming to a baby shower, at her home, to bring a wash cloth and soap. They thought she was nuts, until she told them why. She called her Dentist and Doctor’s offices and asked what kind of medicines would be needed to help out in a poverty area. She collected toothbrushes, bandages, etc….until she had suitcases full of things to take to Cairo with her. Her goal was to do her part to help..

Atira was going with a group on her next trip to Egypt so she asked some of the other members in the tour group to help by bringing used children’s clothing , pencils, and children’s books with them to be given to this caring Nun Sister E. Eight other people were kind enough to collect and bring pens, coloring books, clothes, and various toys, to help.

On their arrival in Cairo, not knowing what to do with the mountain of supplies for the Nun. She asked the hotel manager if he could try and locate this healer of the poor, and within days, he had located the Nun. But the Nun was out of the country and would not be back until Atira had returned to Seattle.

The Hotel Manager said he would store the goods and present them to the Sister E for Atira. But, that is not the miracle part. The miracle is how one person can effect the lives of others, how our intentions lead us to miracles.

The hotel manager shared the story of Atira’s kind gesture,with other members of the tour.

As it turned out there were two people, who worked with World Wide Health Care Project for the Poor. They had never heard of Sister E. and her plight to help the poor. These men stayed in Cairo longer than Atira could, and were there when the goods from Atira were collected by Sister E. These men ended up talking to Sister E. They were able to get her funding for a Health Care Clinic.

When the hotel manager saw Sister E he realized that she often had come into the hotel to use the phone, and he just did not know who she was.

And now, she has FREE phone privileges in his hotel.

Atira wanted to help in a small way….this story makes my heart smile and I hope it does yours too. Helping in whatever way you can help makes miracles unfold for others.

P.S.
Atira still travels to Egypt regularity. She always tries to take something to help Sister E. It was three years before Atira was able to meet Sister E. In person. It was a wonderful meeting with heart felt thanks and a new found friendship. The last time she was there the 66 children needed only $75 extra for vaccinations, and Atira paid for these children. This is one of the finest woman I know. She did get to help in a greater way than she could have ever imagined.