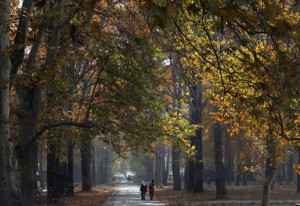 Zen philosophy teaches that enlightenment is contained in a single flower — when we appreciate a blossom, we have found happiness in nature and in our own nature. Start your day with a brisk walk so you can hear the birds, smell the fragrances and feel the fresh air on your skin. If you have a backyard, sit quietly in the early morning light. Let all of your senses absorb the beauty that is around you. ~Chelle Thompson~

Why is it when you get older you begin to notice things you really never paid much attention to before? Simple things. Quiet things. Natural things.

It’s been that way with me, for instance, with flowers. When I was growing up in Moreland, my Aunt Jessie’s yard was the flower capital of the county. People drove from as far away as Grantville, Corinth and Smith City to gaze at the color show Aunt Jessie’s yard put on each spring.

I never paid much attention to her flowers, myself. The only time I ever thought about them was when Aunt Jessie would berate me for tromping through her flowers in search of the baseball I just hit from my yard to hers.

“Get out of those flowers young man!” she must have screamed at me a million times. I never understood her concern. There I was practicing to grow up to be Gil Hodges, and how could I continue without my baseball.

Now flowers slay me. The azaleas will be blooming in Atlanta soon. So will the dogwoods. Their beauty decorates the city in pinks and whites and takes an ol’ flower stomper’s breath. This week there have been days that were certainly whispers of spring. It was warm and still and it chased away the dreariness of winter.

I spent one afternoon on the golf course. On one hole, the sprinkler system was wetting the grounds around it. I smelled a smell I hadn’t thought of in years. The smell of water upon dry soil. I can’t describe that smell in words, but I remember it from when the rain used to hit the dusty dirt road in front of my grandmother’s house.

Also, I remember it from when I would be in my grandfather’s fields, following him as he followed his plow and his mule, and it would “come up a cloud” as the old folks used to say, and the rain pelted down upon the freshly plowed earth and produced that smell again.

I looked up at the absolutely clear, blue sky this week. Its brilliance was remarkable. Up there somewhere was a hole in the ozone layer, but I couldn’t see it.

When chill turns to warm it may be whoever created all this reminding us an end does finally come to winters discontent. This is my forty-fifth spring. But it was only the last several years that I began to take a few moments to relish them.

I vividly remember the first time I really noticed and appreciated the coming of spring. I was on a golf course then, too. Augusta National. I had just turned thirty. I was covering the Masters golf tournament for the Chicago Sun-Times. I was standing on number 16 on an April Sunday that was spectacular. It was warm and cloudless. There was the green of the turf, the blue sky, the pink azaleas.

I would be catching a flight in a few hours, back to Chicago. I’d called the office earlier. They said it was snowing. I stood out there and soaked it all in for the first time. It did something to my soul. It also did something for my future.

I vowed at that moment, I’d never miss another Georgia spring. Twenty-two days later, I was back home in Atlanta with a job as a typist of words upon blank sheets of paper.

Fifteen years later I am still taking the time to smell and feel the glory of springtime. Getting older does have its benefits.

Sorry about the flowers I stomped, Aunt Jessie. I never learned to hit a curve ball anyway.

By Lewis Grizzard (who died in 1994 … two years after this writing)
Author and Columnist, Atlanta Journal-Constitution