More Than A Picasso 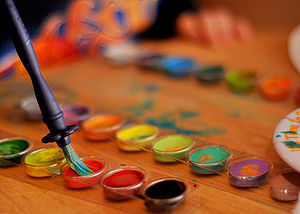 I was 18 years old — determined it was time to spread my wings, to set out on my own, to get my own place. So, this particular art show was more fun than most.

I looked around through my most critical eye for just the right piece to put in the new apartment I was going to rent. Many of the pieces I saw were beautiful, but far too expensive for someone with more dreams than money.

However, one picture caught my eye. It was a bright yellow sun in a faded red frame — fairly abstract, more cartoon than art. A face was painted on the sun … blue eyes, big red mouth, turned upwards in a smile. It was happy, and looking at it made me happy. A name was scrawled in the bottom left corner … “Billy Williams.”

Stepping back a little to study it further, I told myself I’d never spend money on a painting like that, because after all, I could paint one just like it if I really wanted one. There didn’t seem to be a lot of artistic talent, and in fact, it looked like a child had done it. If a child could do something that caught my attention, I could do the same thing, only better! Yeah. That’s what I’d do. I’d paint my own sun picture!

As I began to move away from the booth, something caught my ear. Was someone talking to me? I didn’t see anyone. I stopped and looked at the picture again. This time, I saw a fellow in a wheelchair trying to get my attention. “Like it?” I thought I heard him ask. It was hard for me to hear him. The tent was crowded and very loud. I moved closer to the man.

“Do I like it? Yes, I really do, but…” He started talking again, but it was hard for me to understand him. He talked very softly and slowly, drawing his words out to the point where my mind had a hard time following them. “I liiiiike to paaaaaint,” he said.

“Really?” I asked, noticing for the first time that there were many other paintings in his booth. “I like your paintings very much,” I continued. “How do you come up with so many things to paint?”

“It’s eeeeasy,” he replied. “Aaaanyone can dooooo it. All youuu have to dooooo is get an ideeeeea in your heeeead, deciiiiide what you waaant to do, and dooooo it.”

He then shared with me how he had painted the sun picture. The entire conversation took about 15 minutes. Fifteen painful minutes. As he struggled to get the words out and I struggled to understand them, I learned a lesson I have never forgotten.

“How much for this painting?” I asked. “Fiiiiive dollaaaaars,” was the reply. I gave him the $5.00, put my prize under my arm, and left.

It had taken Billy Williams 15 painful minutes to teach me a lesson that I’ve kept close to my heart for the rest of my life. This awkward-looking young man, hands gnarled, legs twisted, tongue thick, had broken the code on a part of life I hadn’t even known existed.

The man who made one of the greatest impacts on my life is someone who will never know it. I’ve never seen him again. He would never be able to overcome his physical challenges, but he had learned to deal with them.