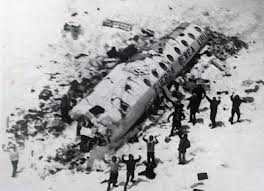 Days of ordeal, Fernando Parrado, Robert Canessa  and other survivors of a plane crash in Andes had to endure before being rescued.

Flying over the mountains on Friday the 13th, the young men and their families who boarded the charter plane joked about the unlucky day when the plane’s wing hit the slope of the mountain and crashed.

On impact, 13 passengers were instantly dead while 32 others were badly wounded.

Hoping to be rescued, the survivors waited in the freezing -37C temperature, melting snow for drinks and sleeping side by side to keep themselves warm. Food was so scarce, everyone had to pool whatever food they can find for a rationed pool.

Desperation and Hunger
As their supply ran out, the survivor tried to eat strips of leather torned from their baggages. The brutal weather and high attitude of Andes had increased their bodies need for energy and food astronomically.

9 days after the crash, due to dire desperation and hunger, the survivors called for an important meeting. One member proposed that they eat the dead.

“If we don’t eat, we’ll die. If you want to see your family again, this is what you must do”, he said.

The 2 hours meeting ended with a conclusion. If any of them died in Andes, the rest had the permission to use the corpse as food.

No Hope
After 2 weeks, their hope of being found dashed when they found out via their radio transistor that the rescue effort was called off. Authority believed that the rescue was very dangerous and the chances of finding survivors too slim.

On the 60th day after the crash, Fernando Parrado and Robert Canessa decided to walk through the icy wilderness for help. By the time they left, Fernando Parrado said, the crash site was “.. an awful place, soaked in urine, smelling of death, littered with ragged bits of human bone and qristle”.

Wearing 3 pairs of jeans and 3 sweaters over a polo shirt, he and his friends trekked the mountains with human flesh as their ration.

Knowing that they must search for rescue, the team endured frozen snow, exhaustion and starvation, walking and climbing for 10 days before finding their way to the bottom of the mountain.

The rescue
The team was finally helped by Chilean farmer who called the police for help. Parrado then guided the rescue team via a helicopter to the crash site.

On the 22nd December 1972, after enduring 72 brutal days, the world founds out that there were 16 survivors who cheated death, in the mountain of Andes. 8 of the initial survivors died when an avalanche cascaded down on them as they slept in the fuselage.

During the ordeal, Fernando Parrado lost 40 kg of his weight. He lost half his family in the crash.