The Champion Of The Poor 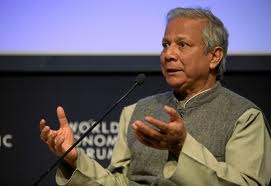 In 1974, Muhamad Yunus was a professor of economics at Chittagong University in southern Bangladesh, when his country experienced a terrible famine in which thousands starved to death.

“We tried to ignore it,” he says. “But then skeleton-like people began showing up in the capital, Dhaka. Soon the trickle became a flood. Hungry people were everywhere. Often they sat so still that one could not be sure whether they were alive or dead. They all looked alike: men, women, children. Old people looked like children, and children looked like old people.

Ashamed of not being able to do anything by teaching economics, he said, ” I needed to run away from these theories and from my textbooks and discover the real-life economics of a poor person’s existence.”

Even before the great famine, less than 40 % of the inhabitants of Bangladesh can satisfy their most basic nutritional needs. The population density exceeds 830 habitants per square kilometer and many families live in the streets, barefooted, without clean water, or a roof to protect themselves.

Realizing that there must be something terribly wrong with the economics he was teaching, Yunus took matters into his own hands. He led his students on a field trip to a poor village and on that day lent from his own pocket the equivalent of Â£ 17 to 42 basket-weavers.

He found that this tiny amount not only can help them survive, but can also to create the spark of personal initiative necessary to pull these peasants out of hardship. He believed that people were poor not because they did not want to work, but they were poor because they lacked resources. The real problem was the absence of credit. Shunned by commercial banks, these poor peasants could only turn to loan sharks

He decided to channel bank loans through wealthier middleman like himself. What he did was to borrow money from these banks under his name and lend this money to the poor. He was taking the risk that normal banks would not.

At the same time, he acted as a guarantor for loans to impoverished village-dwellers, mostly women, who responded with a surprisingly high repayment rate. Encouraged, but eventually tired of going to banks after banks, Yunus decided to start his own. The sole purpose? To loan money to the “poorest of poor”.

In 1983 he opened Grameen Bank, an institution founded on the principles of trust. The prerequisite to qualify for a loan were impoverishment and the desire to work hard. Even when the average loan size was $60, in a period of few years, Muhamad Yunus had delivered more hope to crisis-ridden Bangladesh than anyone before him. By helping these peasants with a tiny sum of loan and necessary skills, he showed them how to help themselves.

Critics were quick to say that his model bank would never work. “Poor people aren’t smart enough to start business,” said the critics. Others believed that small banks like Grameen don’t amount to much and the peasants should be trained for employment instead of risking their capital on business.

Muhamad Yunus’s Grameen Bank eventually put all his critics to shame. The rate of repayment nears 99.5 %, making it the envy of most mainstream banks. 95 % of the loans are repaid on time and the borrowers have saved more than 100 million, all of it on deposit at Grameen bank. A study done by a university in Malaysia showed that half of the borrowers freed themselves from poverty.

Not only that, Grameen is perhaps the only bank in the world that encourages birth control, sanitation and a hygienic environment as part of its lending policy.

And for the first time in the country’s history, poor, illiterate women of Bangladesh are using what rich business owners everywhere have always used to get richer; easy capital, and money to start or nurture their businesses. 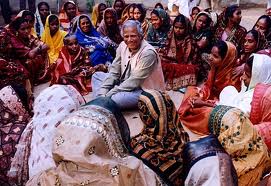 When Yunus was asked why he lends money to women instead of to men, he said, “the women who live in misery adapt better and quicker to the process of self-help than men do. Similarly, they are more attentive, and they aim to ensure their children’s future with more efficiency, and women demonstrate better perseverance in their work. When it is managed by a woman, the money is better is utilized to benefit the family than if it was managed by a man.”

Women, it turned out, were the most reliable small-loan borrowers. Not only they repay their loans, they also clothe, educate and feed their children with their profits. Most men don’t. 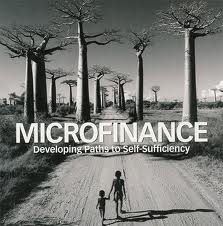 The World Bank recently acknowledged that “this business approach to the alleviation of poverty has allowed millions of individuals to work their way out of poverty with dignity”.

In 2006, during the fasting month for the muslims, Professor Yunus has been awarded the Nobel Prize (Peace) award. In 1994 Yunus won the World Food Prize for his contribution to lowering the malnutrition index in Bangladesh and was awarded the Prize of the Prince of Asturias.

He was named an honorary member of Warwick University of England. In 1996, UNESCO presented him with the SimÃ³n BolÃ­var Prize. In 1997, Professor Yunus led the world’s first Micro Credit Summit in Washington, DC.

His bank has so far lend $4.7 billion dollar to 4.4 million families and more than 250 financial institutions in the world have copied his model.