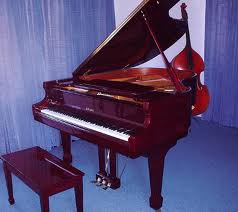 Many years ago, when I was a young man in my twenties, I worked as a salesman for a St. Louis piano company. We sold our pianos all over the state by advertising in small town newspapers and then, when we had received sufficient replies, we would load our little trucks, drive into the area and sell the pianos to those who had replied.

Every time we would advertise in the cotton country of Southeast Missouri, we would receive a reply on a postcard which said, in effect, “Please bring me a new piano for my little granddaughter. It must be red mahogany. I can pay $10 a month with my egg money.” The old lady scrawled on and on and on that postcard until she filled it up, then turned it over and even wrote on the front — around and around the edges until there was barely room for the address.

Of course, we could not sell a new piano for $10 a month. No finance company would carry a contract with payments that small, so we ignored her postcards.

One day, however, I happened to be in that area calling on other replies, and out of curiosity I decided to look the old lady up. I found pretty much what I expected: The old lady lived in a one room sharecroppers cabin in the middle of a cotton field. The cabin had a dirt floor and there were chickens in the house. Obviously, the old lady could not have qualified to purchase anything on credit — no car, no phone, no real job, nothing but a roof over her head and not a very good one at that. I could see daylight through it in several places. Her little granddaughter was about 10, barefoot and wearing a feedsack dress.

I explained to the old lady that we could not sell a new piano for $10 a month and that she should stop writing to us every time she saw our ad. I drove away heartsick, but my advice had no effect — she still sent us the same post card every six weeks. Always wanting a new piano, red mahogany, please, and swearing she would never miss a $10 payment. It was sad.

A couple of years later, I owned my own piano company, and when I advertised in that area, the postcards started coming to me. For months, I ignored them — what else could I do?

But then, one day when I was in the area something came over me. I had a red mahogany piano on my little truck. Despite knowing that I was about to make a terrible business decision, I delivered the piano to her and told her I would carry the contract myself at $10 a month with no interest, and that would mean 52 payments. I took the new piano in the house and placed it where I thought the roof would be least likely to rain on it. I admonished her and the little girl to try to keep the chickens off of it, and I left — sure I had just thrown away a new piano.

But the payments came in, all 52 of them as agreed — sometimes with coins taped to a 3×5 inch card in the envelope. It was incredible!

So, I put the incident out of my mind for 20 years.

Then one day I was in Memphis on other business, and after dinner at the Holiday Inn on the Levee, I went into the lounge. As I was sitting at the bar having an after dinner drink, I heard the most beautiful piano music behind me. I looked around, and there was a lovely young woman playing a very nice grand piano.

Being a pianist of some ability myself, I was stunned by her virtuosity, and I picked up my drink and moved to a table beside her where I could listen and watch. She smiled at me, asked for requests, and when she took a break she sat down at my table.

“Aren’t you the man who sold my grandma a piano a long time ago?”

It didn’t ring a bell, so I asked her to explain.

She started to tell me, and I suddenly remembered. My Lord, it was her! It was the little barefoot girl in the feedsack dress!

She told me her name was Elise and since her grandmother couldn’t afford to pay for lessons, she had learned to play by listening to the radio. She said she had started to play in church where she and her grandmother had to walk over two miles, and that she had then played in school, had won many awards and a music scholarship. She had married an attorney in Memphis and he had bought her that beautiful grand piano she was playing.

Something else entered my mind. “Elise,” I asked, “It’s a little dark in here. What color is that piano?”

Did she understand the significance of the red mahogany? The unbelievable audacity of her grandmother insisting on a red mahogany piano when no one in his right mind would have sold her a piano of any kind? I think not.

And then the marvellous accomplishment of that beautiful, terribly underprivileged child in the feedsack dress? No, I’m sure she didn’t understand that either.

But I did, and my throat tightened.

And I did have to go to my room, because men don’t like to be seen crying in public.